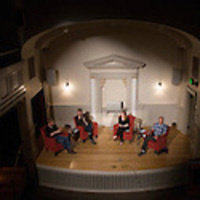 This restored 120-seat recital and lecture hall was named in honor of Ruth Baker Kimball ’31, who served the college as a distinguished volunteer for many years.

The blending of the old with the new was showcased during the inaugural Whitman Undergraduate Conference on April 6, 1999, when Hunter’s Kimball Theatre offered students a remarkable new venue in which to present their research projects in what became a signature program of Whitman’s liberal arts education.

Come listen to some a cappella before finals hit! The joint concert between Sirens & Tones will showcase all of the music that the groups have been working...

Lacy M. Johnson is a Houston-based professor, curator, activist, and is author of THE RECKONINGS (Scribner, 2018), which was named a National Book Critics...

Jane Miller has written twelve books, most recently the poetry collection Who Is Trixie the Trasher? and Other Questions, and From the Valley of Bronze...

Rachel Heng is the author of the novels The Great Reclamation (Riverhead, 2023) and Suicide Club (Henry Holt, 2018), which has been translated into ten...

Chad S. Hamill/čnaq’ymi, “Coyote Made the...