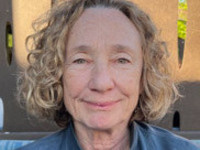 Jane Miller has written twelve books, most recently the poetry collection Who Is Trixie the Trasher? and Other Questions, and From the Valley of Bronze Camels: A Primer, Some Lectures, & A Boondoggle on Poetry. She has performed her creative work and lectured on literature and the fine arts at universities, colleges, libraries, community centers, and arts venues for over thirty years. Miller is the recipient of a Wallace Award, a Guggenheim Fellowship, two National Endowment for the Arts Fellowships, the Western States Book Award, and the Audre Lorde Award. She served as a professor for many years in the Creative Writing Program at the University of Arizona—including a stint as its director—and as a visiting poet at the University of Texas Michener Center for Writers in Austin.