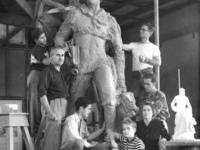 During a week in which we reflect on the legacy of colonial violence and the survival and perseverance of Indigenous peoples, authors and community members will explore critically the legacy of Marcus Whitman and Manifest Destiny discussed within two recently published books, Sarah Koenig's Providence and the Invention of American History (Yale University Press, 2021) and Blaine Harden's Murder at the Mission: A Frontier Killing, Its Legacy of Lies, and the Taking of the American West (Viking, 2021).

Community members from Whitman College and the Confederated Tribes of the Umatilla Indian Reservation will offer commentary on the scholarly contributions of these books as tools for unlearning the myths that continue to inform American history.

This event is jointly sponsored by Whitman College’s Department of History and the Confederated Tribes of the Umatilla Indian Reservation.

All Unmaking Whitman, Unlearning the Myth events will take place in-person for Whitman students, faculty and staff. The public is invited to participate via the event livestream at live.whitman.edu.

Thursday, October 14 at 7:30 p.m.:  Book Talk by author Sarah Koenig, "What Do We Do With Whitman? Contesting the Legacy of a Providential Icon." Live event in Maxey Auditorium, livestream on live.whitman.edu.

Each author will take 10-15 minutes to talk about their books.  Those talks will be followed by short responses by community members, including:

Sarah Koenig is Assistant Professor of History at Ramapo College in New Jersey where she teaches courses in Native American history, the American West, and the anthropological study of religion.  She earned her joint Ph.D. in History and Religious Studies from Yale University. Her book, Providence and the Invention of American History (Yale University Press, 2021), traces the controversies over Protestant missionary Marcus Whitman’s legend in order to understand how providential history—the conviction that God is an active agent in human history—has shaped the American historical imagination, and particularly, narratives of Western expansion.

Blaine Harden is journalist and author of Murder at the Mission: A Frontier Killing, Its Legacy of Lies, and the Taking of the American West (2021). Harden has written for The Washington Post, The New York Times, and contributed to the Economist and PBS Frontline. In 1996, he authored A River Lost: The Life and Death of the Columbia and has written five other books. Murder at the Mission dismantles the legend about how the Pacific Northwest became part of the United States revealing how Protestant ministers worked together to falsify history, invent a fake hero, and sanctify white conquest, ultimately helping to justify a century of abusive treatment of Native Americans.