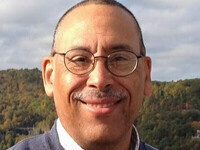 Steve Hammond, “Reconstructing a family narrative before and after Reconstruction”

Join Whitman alumnus Steve Hammond '79 as he shares the Syphax family history of his southern roots in New Orleans. Learn about an ancestor who was a member of the Electoral College in 1876 for THE most controversial election in US history. Get a glimpse of the life of a free black man whose goals in life were to help others, find equality for the races, and provide a good education for his children.

Steve graduated from Whitman in 1979 with a combined degree in Math and Geology. He and his wife Charlotte Bibb Hammond '79 live in Sterling, Virginia, and have two adult daughters.

He went on to a productive 40-yr career with the United States Geological Survey where he is now an Emeritus Scientist. Upon retirement, Steve traded his full-time geology work for genealogy and family history research.

Steve is a 7th generation member of the Syphax family of Washington, DC: a line that moved by force to New Orleans and then by choice to Denver. His is a contribution to the movement against more traditional historical scholarship as he helps make the field more relatable and relevant to the public at large, particularly as interest in and access to DNA/ancestry/ genealogy data becomes available. He has participated in a variety of National Park Service programs at the Arlington House – the Robert E. Lee Memorial to highlight the lives of his Syphax ancestors and other enslaved Americans on the estate. He has been interviewed by and has contributed to exhibits at George Washington’s Mount Vernon, the Smithsonian National Museum of African American History and Culture and the White House Historical Association.

Steve is also a charter member of the Sons and Daughters of the United States Middle Passage, the Afro-American Historical and Genealogical Society and the Louisiana Historical Society. He currently serves as a Trustee for the Arlington House Foundation and for Whitman.