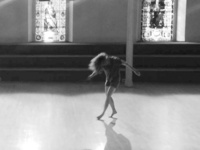 Spring Studio Series/ Hadar Ahuvia (O'Donnell Visiting Educator): The Dances are For Us

Hadar Ahuvia's The Dances are For Us performs an homage to and a break from a legacy of Zionist cultural workers by rearranging beloved Israeli folk songs and dances to face the Nakba. (Nakba, Arabic for catastrophe, refers to the expulsion and dispossession of the Palestinians in 1948 as a result of the founding of the state of Israel). The work builds on Ahuvia’s research on the construction of Israeliness in early Israeli folk dances based on appropriated indigenous cultures and proposes a way of breaking the cycles of transmission, appropriation, and theft- across vast plains of ideological manifestations and technological advancements- that have present-day consequences for Palestinians, Israelis and Americans. This performance will be followed by a post-performance discussion moderated by Associate Professor of Anthropology Suzanne Morrissey