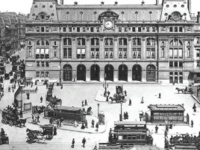 CYTOARCHITECTONICS AND NEUROANATOMY IN RILKE’S PARIS

A LECTURE BY DR. SONJA BOOS, UNIVERSITY OF OREGON, DEPARTMENT OF GERMAN

In R. M. Rilke’s The Notebooks of Malte Laurids Brigge, the poet’s dark vision of a partially demolished Parisian tenement building allegorizes the neuroscientific practice of sectional brain ablation. Malte’s allegorical mode of seeing stands in stark contrast with the exacting scientific gaze of the clinicians he goes to see at the Salpêtrière hospital. At stake in Rilke’s novel are the terrors of electroshock therapy, the biopolitical mis-management of corpses, and the practice of the human autopsy, which were all part of a move to “scientize” the field of neuroanatomy around 1900.

EVENT IS FREE AND OPEN TO THE PUBLIC