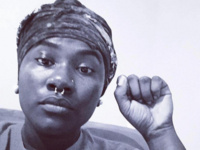 Angel Patterson is a trans gender non-conforming femme activist from the Dominican Republic via the Cuban diaspora. When she was a teenager, she was placed in solitary confinement at an immigration detention center after revealing her trans identity.

Migrating throughout the rural south, Angel is known for her work with the organization SONG, where they focus on battling deportations, transphobia and femmephobia. She is also a co-founder of the UndocuBlack Emergency Fund.

Angel will discuss living at the intersection, blackness, queerness, and her journey as an undocumented youth.

This event is co-sponsored by ASWC and WEB.