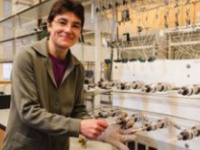 From Proto-Earth to Modern Earth: Constraints from experimental petrology

The fundamental differentiation of the Earth was into a Fe-Ni-rich metallic core and a surrounding silicate mantle. The study of the mantle abundances of these siderophile elements, together with knowledge of their metal-silicate partition coefficients as a function of physico-chemical variables such as temperature, pressure and oxygen fugacity, may shed light on how core formation occurred, and on how the Earth accreted. The most likely scenarios will be discussed considering interactions between coexisting silicate, sulfide and metal phases.