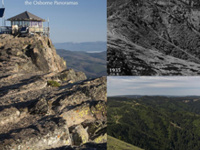 Known collectively as the Osborne Panoramas, reproductions of these historical photographs taken from mountain-top fire lookouts in the 1930s will on view in the Sheehan Gallery beginning January 31st.

Many of the featured panoramas come from locations in the nearby Blue and Wallowa Mountain regions, including Table Rock at the head of Mill Creek. These panoramas are shown alongside their modern equivalent, current landscapes, photographed by John F. Marshall, an accomplished landscape photographer and wildlife biologist from Wenatchee, Washington. Through his carefully curated compositions, Marshall reveals what happens in the 25 years after a forest burns.

An Osborne Photo Recording Transit will also be displayed in the Gallery. The original camera type that shot the 1930s images, only 10 of these devices were made and this is one of the only two known to still exist.

In addition to his photographs, John Marshall teamed up with Dr. Paul F. Hessburg, a U.S. Forest Service Research Scientist and UW Professor. With additional support from Wallowa Resources, together Marshall and Hessburg created a vibrant didactic display. Throughout the gallery, their informational panels describe the fire ecology of our region, highlighting the way past fires inform contemporary landscapes. Through research-based descriptions and Marshall’s engaging imagery, wildfire is presented as both end and beginning, inseparable from the land it shapes.

There will also be a panel discussion featuring John F. Marshall and Dr. Paul Hessburg on Friday, January 31st, at 5:30 pm, in Olin 138. An informal reception will follow afterward in the Sheehan Gallery.