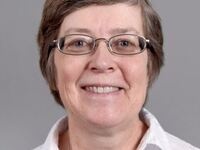 Life and Death in the Medieval Polis, Cyprus

Brenda Baker is Associate Professor in the School of Human Evolution and Social Change at Arizona State University. She is also a core faculty member of the Center for Bioarchaeological Research and curates the ancient Nubian collections housed at ASU. She directs the Bioarchaeology of Nubia Expedition (BONE) in northern Sudan and is the founding co-editor-in-chief of Bioarchaeology International (2015-present). Baker taught previously at Tufts University (1992) and Minnesota State University Moorhead (1993-94), and was director of the Repatriation Program and curator of Human Osteology at the New York State Museum from 1994-1998. She has served on the Executive Committee of the American Association of Physical Anthropologists, as an associate editor of the International Journal of Paleopathology, and is a founding Steering Committee member of the Western Bioarchaeology Group.