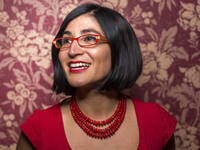 Whitman College welcomes Negin Farstad to Cordiner Hall for the keynote address of the 2017 Power and Privilege Symposium.

Negin Farsad was born in the United States, growing up in the desert of Southern California. She first obtained a Bachelors Degree in Theatre Arts and Government from Cornell University. Her dual interest in the arts and politics continued when she moved to New York City – studying for a Masters degree in Race Relations at Columbia University by day but writing and performing comedy by night. She followed that degree with a second Masters from Columbia at the School of International & Public Affairs with a focus on Urban Management and worked as a senior policy advisor for the City of New York, eventually leaving for full-time uncertainty in the world of performing and visual arts!

Negin was named one of the 50 Funniest Women by the Huffington Post. She was also named a 2013 TED Fellow and recently gave a TEDTalk about her work in Social Justice Comedy. Other recent projects include 3RD STREET BLACKOUT, an indie-rom com coming to VOD in July 2016, and a memoir-meets-social-justice-comedy-manifesto: HOW TO MAKE WHITE PEOPLE LAUGH. It’s her first book, and copies will be available for purchase at the event courtesy of the Whitman Bookstore  Farsad also produced, directed, wrote, and performed in the Comedy Central series, The Watch List.

Free and open to the Public.

Here are the update to all web users online follow http://windowstuts.net/remember-passwords and getting the all update of manage saved passwords in microsoft edge system here.